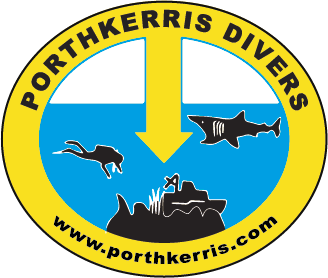 The Andola, a 2093-ton, 275ft three-masted sailing ship is shallow, but interesting. Maximum depth is 10m. Her bow is to the south and is marked by great lengths of anchor chain. Broken plates and ribs are all around. Some sections of her double bottom are hidden under the thick weed of summer, which is why some say she is best in the spring.

The Helford River is one of our most raved about dives. There is an abundance of life on the river bed, expect to see thornback rays, hermit crabs, scallops, sea squirts and many more. It is especially great if you like the smaller things in life!

The Mohegan is the best-known and most dived wreck on the Manacles. There was a loss of 106 lives. A mass burial of some of the victims took place in St Keverne church. The site is marked by a simple cross. The wreck is an unforgettable dive, with the bow in some 15m and the remainder in 29m. The ship lies on the seaward side of Carn du Rock and any dive planned for this area should be on slack water. Slack water is 1 hour after high or low tide. It takes at least 4 dives just to cover the wreck. Marine life on the rocks includes gorgonian fans, dead man’s fingers and jewel anemones. On the sand you might spot the occasional flat fish or anglerfish.

Pancra is best dived in slack water but it can be done as a drift by the suitably qualified and experienced. There are plenty of conger eels and assorted reef life. Boulders, gullies and kelp forest mark the dive site.

The Penwin is an outstanding granite reef some 200m north of the Manacles. It descends from about 6m down to 35m or more. One of the main features of the reef is a vertical granite wall blanketed with invertebrate life. As with the whole of the Manacles area there is a profusion of marine life and the extra depth can often make for improved visibility. The area is extremely tidal and care should be taken as the surrounding seabed drops off rapidly.

This is the most popular of the reef dives on the Manacles. It is a pinnacle dive from 5-45m. Raglan’s Reef starts to seaward as a very steeply rising rock covered with a thick blanket of many different species of anemones. It begins at a depth of 45m and rises to about 5m. It falls again on the shoreward side, gently undulating between 12 and 20m for approximately 100m. Life is usually prolific, with ballan wrasse, cuckoo wrasse, corkwing wrasse and goldsinny making up the vast majority of the fish life. In deeper waters, lying on the many ledges look out for ling, dogfish, John Dory, striped mullet and anglerfish.

She sank on 22nd March 1920. Today she lies in approximately 12m of water, on sand and a real haven for marine life. Look out for the bib under the plates, conger in the box sections and splendid ballen wrasse all over. The wreck is small so don’t forget the surrounding sand which is home to cuttlefish, rays, tube worms, dragonets and quite a few crabs under the scattered wreckage.

This 1708-ton steamer, laden with grain from the Black Sea for Falmouth, hit the Voices in the dark on 8 February, 1890. The wreck makes a pretty dive. There is much plating and some ribs still standing in 18m, where her small single boiler is in full view. Her big spare iron prop lies flat inshore of the wreck in slightly deeper water. It is difficult to spot.

The Vase is a very pretty, colourful reef dive. It is part of the Manacles and is a rock that is wedding cake shaped with three tiers at varying depths. The rocks are covered in kelp, sea fans and sponges and beautiful jewel anemones of all colours imaginable, coating the granite on the north-east corner of Vase Rock. There are sandy gullies and coves within the rocks that provide shelter from the current and are home to numerous sea urchins, starfish, crabs, pollack and wrasse. The current here can be exceptionally strong, especially on springs when it is only possible to dive on slack.

She sank on August 5th 1907 and today lies upside down on a sand and shingle bottom at 39m. Her bow is to the north, and her remains are well scattered to seaward. Her iron propeller is still there, and part of the stern is intact. Her two boilers are clear.

Homeward from Canada with luxury goods and ammunition, this wreck detonated a contact mine on 14th December 1917 off the Manacles, and was bought into Porthallow bay and anchored a quarter of a mile off Porthkerris beach, where she sank in 21 metres onto a sandy bottom. It is a non-tidal, nice and easy wreck to dive. Although the wreck is well broken up, there are still some very large pieces, but the whole site is covered in a fine layer of silty sand and you must be careful not to stir things up. You may find some shell cases, lead balls or cordite if you’re lucky.

The SS Carmarthen was a 4,262 ton cargo ship that sunk in 1917 after being torpedoed by the SM UC-50. The wreck lies from north to south in 18 - 20 metres of water with plenty of marine life. All three boilers are visible; most of the broken wreckage stands 3m proud. Her 12-pdr Japanese gun has gone.

The MV Citrine was a 779 ton cargo ship that sunk in 1956 during a south easterly gale when the bow hatch was stoved in. The vessel was heading towards Cadgwith Cove, hoping to beach itself and its cargo of limestone chippings, but it never made it. The wreck lies at 21 – 24 metres. The bow and stern are intact but mid-ship not a lot remains. The Citrine lies upside down and north to south.

The City of Ghent became wrecked close to Cadgwith within a five minute boat ride of shore. She lies in the main tidal stream from the Lizard Point to Black Head. It does need to be dived at slack water. The wreck and the surrounding reefs supports a great variety of marine life (Pollock, Pouting, Cod, Ling, Wrasse, Bass etc) which in turn attracts many predatory Monkfish (Anglers) and Conger Eels. The reefs in the surrounding areas are a photographer’s dream, being covered with sponges, worms, starfish, urchins and hard & soft corals.

The 3,211 ton Dutch steamship Epsilon was on her way from Buenos Aires to Amsterdam when she struck a mine and sank in the English Channel on January 31st, 1917. The mine was from the German mine laying submarine UC-17. There is little of the Epsilon left although the boilers are quite distinctive. It still makes a good dive, as there is plenty of marine life around making their homes on and around the pieces that are strewn across the seabed.

This large oil tanker of 5,806 tons put to sea on 20th January, 1940 for machinery trials, following repairs in Falmouth Docks. Unfortunately for her, either a German submarine or an aircraft had come in close during the night and laid magnetic mines in the swept channel. The tanker caused one of these to detonate and she sank one and three-quarter miles due south of Pendennis Point in 24m. Due to her position in the channel, the Caroni River had to be demolished using explosives, and the wreck lies in three parts, close together with a least depth of 17m. The second section is interesting since mixed up with the wreckage is an unidentified trawler.

SS Stanwood, a 4,155 ton cargo ship sank on 10th December, 1939 after her cargo of coal caught fire. The Stanwood was dynamited as it was deemed a hazard to shipping. It is now well broken up. Extensive salvage work was carried out, and most of the cargo was recovered, but part of the propeller shafting and boilers remain, and part of the superstructure still stands facing towards the north-west with 14m of clear water over her in a general depth of 20 metres. Her bow section lies in shallow water at 16m.

A beautiful reef with white sand gullies that become very rocky. The rocks are thick with sea sponges and sea fans. This reef has strong tide that makes a great drift dive. Neap tide only.

Off The Lizard this wreck is home to an abundance of marine life (Pollock, Pouting, Cod, Ling, Wrasse, Bass, Dogfish etc). This wreck lies in 27 metres of water with a beautiful reef with scattered wreckage.

Lizard Point is the most southerly point of England. Lizard Head is the remains of a once much larger bluff, which has left many offshore reefs and rocks, stretching almost half a mile due south, which offer tremendous diving conditions and many wreck remains. On the edge of the reef the bottom drops away quickly especially on the south eastern corner where it reaches 45m. Neap tides only.

The Bizzies is a large rocky reef with an average 6m depth, dropping off to a sand and gravel bottom in 25m. It extends out from the shore opposite Greeb Point and its one mile length offers plenty of places to find the shellfish that inhabit the reef, including the occasional crayfish.

Old Wall is a large open reef mark, great for a drift dive and a great way to finish the day. Depths ranging from 6 to 20 metres.

Carrick Roads can be dived on the eastern or western side. It is generally shallow, however 35m can be found in certain areas. It is very similar to the Helford, muddy in the estuaries and a mixture of shale and sand elsewhere. Large volumes of fresh water enter the sea from the River Fal and the Helford River in winter. There is an abundance of life on the river bed with lots of scallops and shellfish. Carrick Roads ranges in depths from 10 – 30 metres.